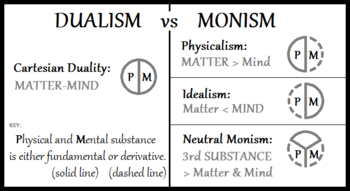 The mind and brain debate is a historical debate of the nature of the mind, soul, spirit, essence, etc. which dates back to the classical era.  To summarize, there are two major schools of thought, that claims that the mind is of a single nature and it’s called Monism. Under monism there are also two minor schools, Idealists, those that emphasize ideas, and Materialists, those that have a mechanistic view of the world, where everything operates under the principle of determinism. The second major school of thought is that of Dualism, which claims that there are two worlds or natures of things. Some of the most notable thinkers and ideas are: Aristotle, the world is split into the material world and the rational world. Descartes, the mind and brain are of two different natures but interact with each other, he also argued that the key to all knowledge is reason, hence the term Cartesian rationalism. A third school is that of empiricism, which also stated that body and mind are different stated, but physical principles also govern the mind.

In today’s world, and with the prevalence of science, one might assume notion that the mind and the brain are the same thing, without much investigation. However, as mentioned in the summary earlier, the mind-body problem has been examined extensively through history. One of the most notable philosophers that tackled the subject was Descartes. His approach to the mind body problem stemmed from trying to establish a method of absolute certainty, free from confusion, conflict, and beyond doubt and skepticism. After exercising his methods of doubt, he concluded that the only thing that can’t be doubted is, cogito ergo sum, I think; therefore I am. He reasoned that we can doubt our bodies and still exist; hence we are thinking things .

If one wants to rephrase Descartes’s reasoning, one could say that he believed that thought precedes existence, but that begs the question, how can you think if you did not exist? It simply can’t be. That’s why dualism was essential for Descartes’s theory to be valid; the mind must be of a different nature than the body in order for reason to precede existence.

Descartes demonstrated the significance of dualism in the mind-body problem, especially in an era where the philosophy of science was in its early ages. However, in present day and after the tremendous advancement in technology, neurology, and psychology, Monism, and in particular materialism seems more relatable. For one, we perceive the dual nature of the computer experience, where we interact with the hardware to manipulate the software, and the software appears in a different mode from the hardware, does that make them of different natures? Is the software metaphysical?

To conclude, the mind-body debate allows us to see how interested we are to know who we are and how we think, and how our environment and advancement in literature and science contributed to the process of figuring out our minds.

Posted by Roy Riachi at 7:59 PM No comments: